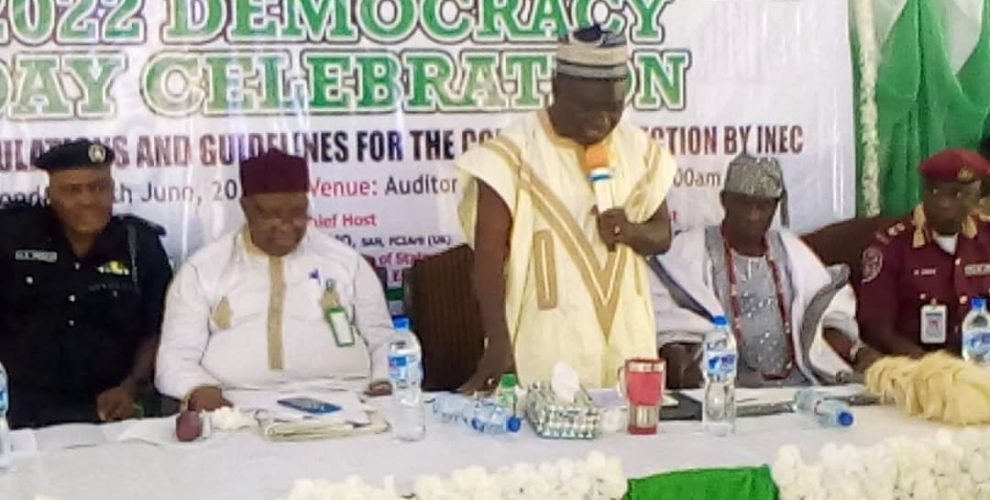 The Director-General, Michael Imoudu National Institute for Labour Studies(MINILS), Ilorin, Comrade Issa Aremu, mni, npom, has called for an issue-based elections as a major means to strengthen the country’s democracy.

Comrade Aremu made this call during MINILS inaugural Democracy Day sensitization and lecture on the theme: “The Importance of PVCs in the Electoral Process” by the INEC Resident Electoral Commissioner (REC) Kwara State, Mal. Garba Attahiru Madami held at the Institute’s Training Hall on Monday, 13th June, 2022.

The Director-General, who noted that Nigeria has come of age in democratic renewal, expressed optimism that the forthcoming elections will be free and fair, and emphasised the need for the 2023 election debates to be based on the new national development plan which is projected to span between 2021-2025.

While highlighting the successes the country has recorded within the last two decades of democracy, Comrade Aremu commended President Muhammadu Buhari for courageously repressing what he called “the historic injustice of the criminal annulment of June 12th of 1993” and cautioned against the return of military rule particularly in Nigeria and Africa in general.

He said, “Nigeria and indeed Africa should never return to the dark days  of military dictatorship with all its gross violations of workers’, trade unions’ and human rights. We are in an interesting times of democracy renaissance in Africa.

“The military should not opportunistically ‘weaponize’ the shortcomings of democracy to usurp power which belongs to the people in the first instance. ECOWAS should toughen the sanctions against military juntas and make sure they return to barracks. Africa needs more democracy to deepen democracy not military intervention,” he added.

The Director-General, who described MINILS as an institutional democracy dividend which is committed to total democracy,  said that part of his achievements within his one year in office is the formulation of first strategic four-year plan founded on the democratic values of openness, transparency, impulsivity, women and gender/youth involvement, adding that the Institute is poised to expand the academic curriculum of its implant and regular programmes to include social dialogue, social justice as well as civic education to ensure workspace democracy.

He noted that MINILS as a training and research institute is partnering with the federal and state governments, employers’ associations, trade union as well as civil society groups to deepen democratic process through promotion of Labour education on workplace democracy, social dialogue and tripartism.

2022 Democracy Day Celebration: MINILS/INEC on Regulations & Guidelines for the Conduct of Election.